How to Build Big Arms – Pack on Mass Without Arm Workouts

Are you spending hours each week curling dumbbells and pumping out skull crushers? Are you skeptical when someone says you can build bigger guns without arm workouts? We’ve investigated this theory by conducting our experiment and the results are in: You can build big arms WITHOUT isolation moves.

If you’re anything like me, skipping curls, rope pushdowns and skull crushers might make you feel like you’re neglecting your arms. Biceps and triceps hardly feel sore, and it seems that – if anything – they got smaller! Demolishing your arms with super-set isolation moves might seem like your best option. But is it?

In March 2017 I began working out after a 6-month break. This break followed an injury to my elbow caused by skull crushers (that’s a story for another day). I was on a push/pull/leg split and added an arm day to give my guns some extra love. After injuring the ulnar nerve and developing tendonitis, I decided to re-think how I use isolation moves and completely cut them from my next routine.

In addition to studying what would happen to my arms, I thought I may as well investigate several myths all in one go. They were as follows:

On 6th March 2017, I had a DEXA body scan and a BodPod. My body fat percentage was 25.9% according to DEXA, and 25.1% according to BodPod: a stark contrast to body fat calipers and the tape measure which showed me at around 13-15%. Six months of eating junk and avoiding exercise had ravaged my once youthful and toned body. So, taking everything I had learned over the past few years into account, I designed a program to get me back in shape. Having researched body recomposition, I decided this was the best route to take. But I wanted to prove that it was not possible to build big arms without dedicated arm workouts. This way I could justify the injury I had given myself as an “inevitable necessity” in my quest for bigger guns. 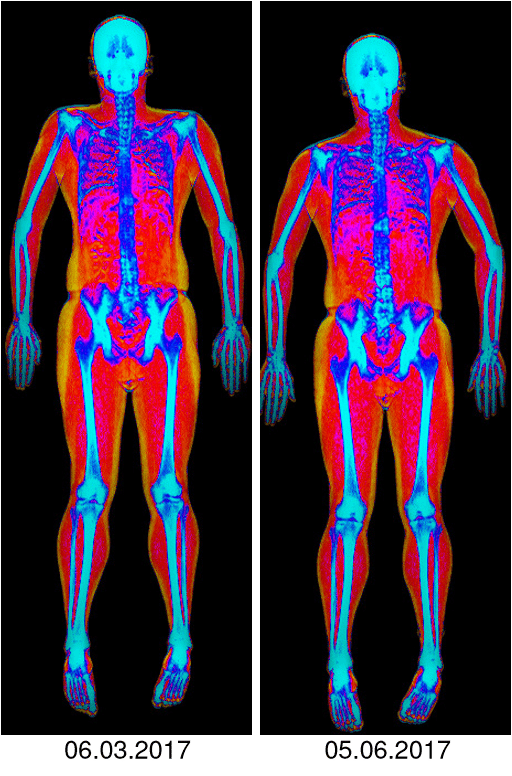 The images are very nice, and all. However, it’s difficult to visually see how much mass has actually been added to the arms. Below, I have summarised the data from both scans and included the source data as well. This data is looking at lean body mass, not total mass. As you will note from the source data, fat reduced all over, and lean mass increased.

It was important that the workout address the issues with disproportion – which is evident from the first scan. As can be seen from the numbers above, the variations between the left and right side of the body have reduced, and the overall body fat percentage is evener.

I worked out 4 times per week, for 13 weeks, using an upper and lower body split, as follows:

Workouts were kept at 55-65 minutes – including warm-up. I increased gains week after week – even in a caloric deficit, so I didn’t see the need to rest/deload at any stage. In fact, I’m currently experimenting with cycling my deload by exercise, and it appears to be working. Except for walking, I did no cardio. Abs were worked on the off days for 5 minutes, and in between sets on hypertrophy leg days. 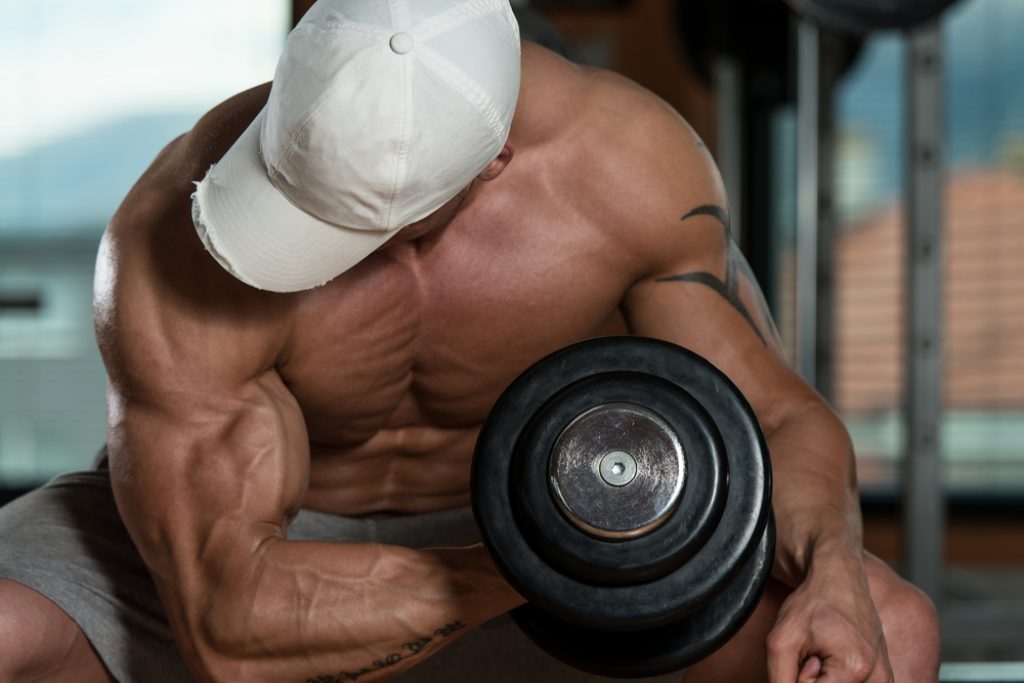 So Should I Avoid Arm Workouts If I Want To Build Big Arms?

The short answer is: not necessarily. It depends entirely on what your goals are. This experiment was performed simply to answer the question as to whether it’s possible. And we have proved that it is. If you don’t enjoy isolation arm workouts, and only do it because you feel you “need” to, then don’t. Make sure you keep on with the heavy compound moves and they will grow – trust me. However, if you feel your arms are lagging, you want them to grow faster and your routine allows time to add a few exercises – by all means, throw in some curls and pushdowns.

Over the next three months, I shall add a few isolation exercises to my routine. I will check to see if the proportion of gains in the arms is higher. During this program, nearly 20% of my total gains were attributable to my arms. If adding close grip bench, heavy EZ-Bar curls, rope pushdowns, and hammer curls take that proportion up to 22% or more, then it is clearly beneficial.

My thoughts are this: If you only have limited time or you’re concerned that you might be overtraining (for instance, your workouts already last longer than an hour, and adding isolation moves will take you to 90 minutes), then leave them out. If you had a choice to either ditch bench press from your routine, or skull crushers, the choice should be obvious. 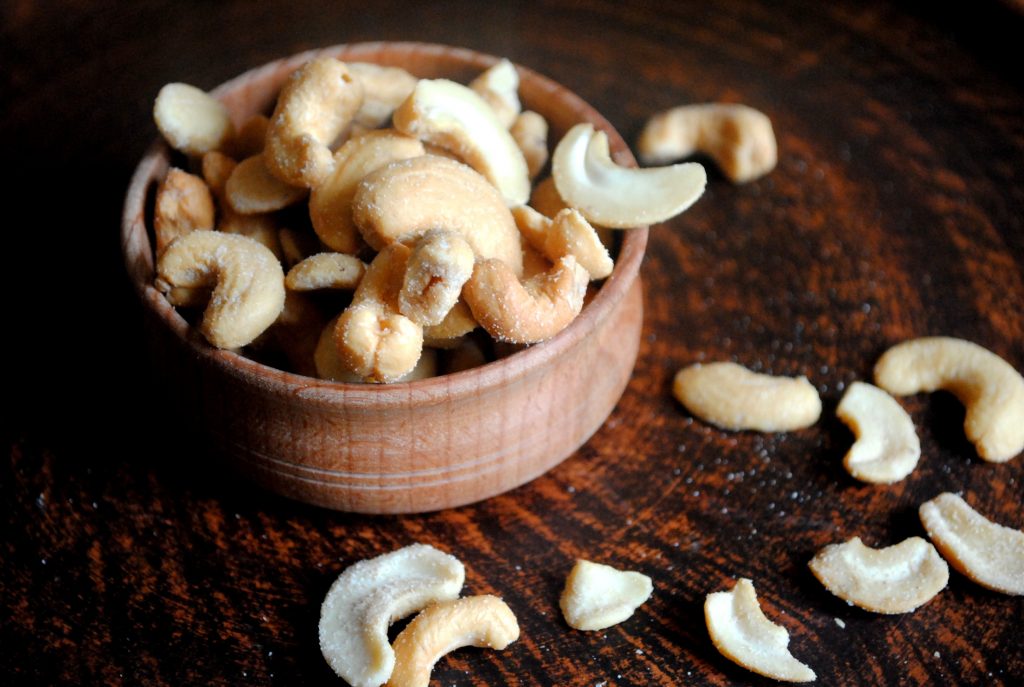 The diet started off well. It tailed off in the middle, and the less said about the end the better! I was in a caloric deficit. However, I became more and more hungry, so gradually increased my calories. By the end of the recomp, I was in a calorie surplus – hence why I put on a couple of pounds, overall. I lost 6.2lb of fat and gained 8.4lb of muscle. Most of the weight gain was likely due to ice cream and chocolate over the last few weeks. A shame really, as the results would have looked even more impressive had I remained strict.

I would classify myself as a mesomorph. However, due to my high-fat levels, I aimed to restrict carb intake – something I would normally only suggest as a necessity for endomorphs. 40-50% of my calories came from fats. In a nutshell (excuse the pun!), I ate a lot of cashew nuts and eggs. I found these a great source of protein and fat and branched-chain amino acids. Using the Fitness Savvy Protein Calculator, I calculated my protein requirements, and the rest of my calories came from carbs. I avoided foods such as white bread, white rice, and potatoes for the first 8-9 weeks, and then as I increased my calories, I began eating more of these foods.

I ate a surplus on workout days, and a deficit on rest days, ensuring I ate within half an hour of completing my workout. My post-workout meal was typically one slice of seeded toast with 4 scrambled whole eggs – more than enough high-quality protein to build muscle. 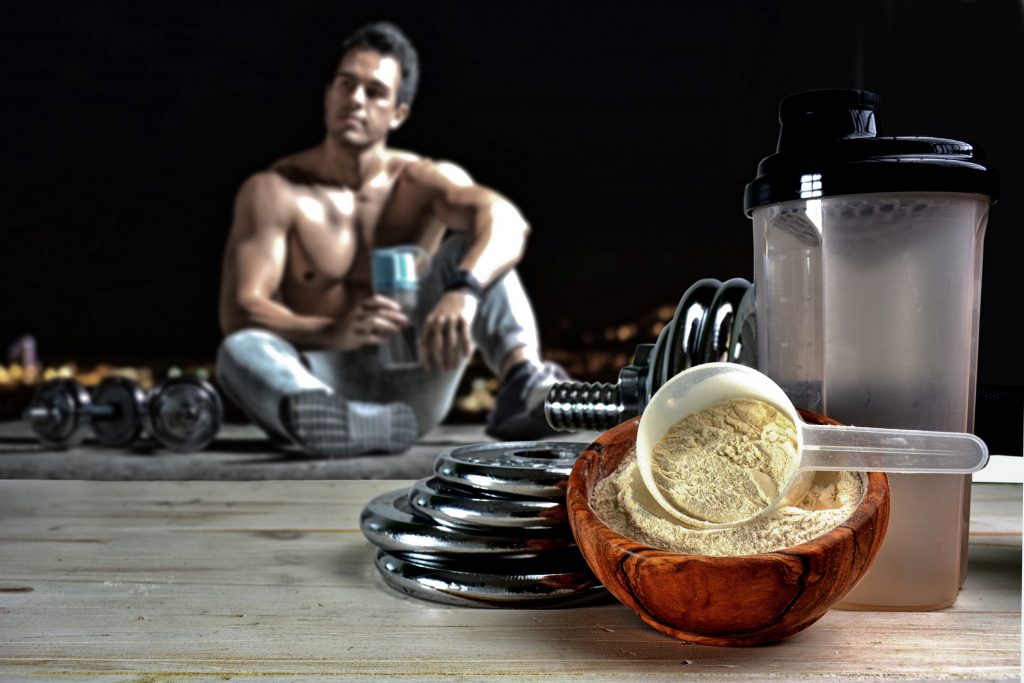 I aimed to keep supplementation to a minimum. Research shows casein protein to be more beneficial during a recomp, so I did grab some of this instead of my usual whey protein powder supplements. My protein requirements were low (around 130 grams per day) meaning I only needed one shake each day, so I saved this to have just before bed. I was intermittently intermittent fasting. Yes, you did read that correctly! I fasted most of the time and worked out in a fasted state. But I was not strict with this. To minimize muscle catabolism I ensured I was consuming BCAAs while fasted and during my workouts.

In conclusion, as you can see, I was able to build big arms with no isolation work. By sticking to heavy compounds movements – deadlifts, squats, bench presses, rows and pull-ups, eating an “adequate” diet and never missing a workout, it’s entirely possible to grow your arms with no dedicated arm workouts whatsoever. So make sure you check out the other articles mentioned here to find out more about the diet and workout plan, as well as the science-y stuff used to design it.

Related Articles
We will be happy to hear your thoughts